Burlington Toyota | Blog | Explore A Vision For Future Mobility, With Fun To Drive Toyotas On Display At The Canadian International Auto Show In Toronto

Explore A Vision For Future Mobility, With Fun To Drive Toyotas On Display At The Canadian International Auto Show In Toronto 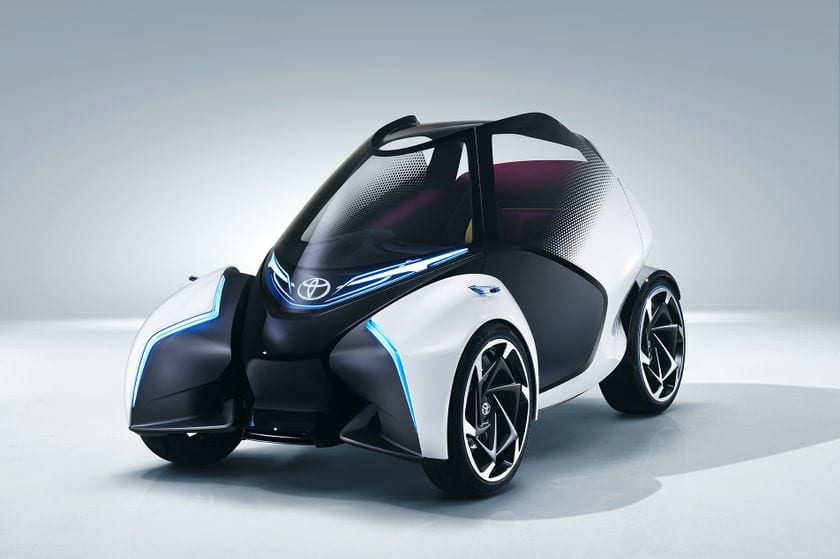 TORONTO, ONTARIO, February 15, 2018 – Toyota Canada is ready for 2018 with a full range of models designed to inspire and impress. Headlining the exhibit at the Canadian International Auto Show in Toronto this month, the Toyota i-TRIL Concept vehicle makes its North American auto show debut.
Commenting on vehicles such as the i-TRIL Concept, Mirai and the all-new Avalon that auto show visitors will see in the Toyota display this year, Toyota Canada Vice President Stephen Beatty remarks, “It’s a very exciting time for Toyota…we’re making a significant impact by pioneering designs and technologies that will power a cleaner, safer and more connected tomorrow, while maintaining a clear focus on delivering some of the most exciting vehicles on the road today.”
Highlights in Toyota’s exhibit this year include:
Toyota i-TRIL Concept
Making its North American premiere, the Toyota i-TRIL Concept is an environmentally friendly compact electric vehicle for urban lifestyles – with a difference. Developed by Toyota’s European Design Development Centre, ED2, i-TRIL is designed to inject passion and driving pleasure into the EV (electric vehicle) segment and incorporates a large range of technology features into its compact size! The i-TRIL is capable of operating autonomously, communicating with the driver primarily through voice activation technology. It also employs the highly engaging Active Lean Technology seen on the Toyota i-road, that made its Canadian debut in 2015, which allows the vehicle body and front tires to lean while the motorized rear tires remain perpendicular to the road surface at all times. Ultimately, the ride becomes so much fun that despite its autonomous driving capabilities, people will wish to control it themselves most of the time.
The i-TRIL Concept is just one example of a series of Toyota mobility solutions. Mobility for All is the company’s mission to give all of humankind the freedom to move without barriers and this commitment extends well beyond automotive – it is Toyota’s vision for the future. Learn more about the i-TRIL Concept, and other solutions designed to meet varying unique needs at mobilityforall.com.
The 2018 Toyota Prius Prime
There’s lots more to see in the Toyota booth as well. Toyota Canada launched the Prius Prime plug-in hybrid with a market test in Québec in 2017 – and the response was incredible, with more than 700 sold in less than seven months. Based on this success, the Prius Prime will go on sale across Canada this year – letting drivers from coast to coast discover what it means to be able to travel for more than 1,000 km on a single tank of gas and a full battery charge. Visitors to the auto show can experience the Prius Prime for themselves during test drives throughout the show.
The 2018 Toyota Mirai
Think you know about Hydrogen fuel cell technology? Test your knowledge, and learn something new with a fun and interactive Time Play game in the Toyota booth, and get to see Toyota’s real example of a hydrogen fuel cell electric vehicle – the Mirai – up close. Following Prius Prime’s successful market launch – plus close work with partners in government, the media and other stakeholders – Toyota Canada has determined that the time is right to bring the Mirai fuel cell electric vehicle to market. As with the Prius Prime launch, the Mirai will be offered initially in Québec, to take advantage of existing hydrogen fueling infrastructure in major metropolitan areas in the province. The knowledge gained through this real-world, market-driven test of Mirai will help Toyota ensure that Canadians embrace fuel cell electric vehicles with the same enthusiasm that they have shown for the Prius and other Toyota hybrids.
The 2019 Toyota Avalon
This flagship vehicle breaks full-size sedan convention – exuding a daring personality with a more youthful and vibrant design. Avalon’s new look is matched by impressive engineering to deliver dynamic performance – including best-in-class handling. Inside, Canadians will enjoy best-in-class roominess and a full complement of powerful, easy to use technologies such as Apple CarPlay, Smart Device Link, and more. The new Avalon achieves more power with less fuel consumption than ever before and top marks for safety.
Other Toyota Highlights at the CIAS
Guests of the Canadian International Auto Show can experience the revolutionary suite of active and passive safety systems of Toyota Safety Sense, now standard on more than 95% of Toyota vehicles in the unique and interactive Toyota Safety Sense Virtual Reality Simulator.
Toyota Canada proudly supports Team Canada through partnerships with the Canadian Paralympic Committee and Canadian Olympic Committee, as well as four national sports organizations. Patrons of the auto show can learn more about Toyota’s commitment to Canada’s elite athletes and teams, as well as meet Paralympic and Olympic athletes by stopping by dedicated display areas at the show.
Toyota’s first-ever global campaign called “Start Your Impossible” will also be featured at CIAS. The campaign, which includes several videos and other pieces of creative that will be seen around the world leading up to and during the Paralympic and Olympic Games, highlights Toyota’s evolution towards becoming a true mobility company and its eight-year global sponsorship with The Paralympic Games and Olympic Games.
The 2018 Canadian International Auto Show takes place February 16-25 at the Metro Toronto Convention Centre.
About Toyota Canada Inc.
Toyota Canada Inc. (TCI) is the exclusive Canadian distributor of Toyota and Lexus vehicles. Toyota has sold over 5 million vehicles in Canada through a national network of 287 Toyota and Lexus dealerships. Toyota is dedicated to bringing safety, quality, dependability and reliability in the vehicles Canadians drive and the service they receive. TCI’s head office is located in Toronto, with regional offices in Vancouver, Calgary, Montreal and Halifax and parts distribution centres in Toronto and Vancouver. Toyota operates two manufacturing facilities in Canada. Having produced more than seven million vehicles, popular Canadian models built at these facilities include Toyota RAV4, Toyota Corolla, Lexus RX 350 and RX 450h hybrid.